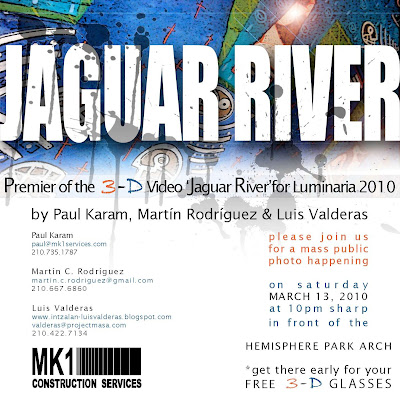 Be a part of the art that night!
Join us at 10pm that evening to participate in the group photo that we take of the installation. Save the date for the premier of the 3-D video collaboration between Paul Karam, Martin Rodriguez and Luis Valderas.

Volunteers Needed!!!
Do you want to help? We are looking for volunteers to pass out 10,000 FREE 3-D glasses to view the video that evening. Please contact us via email: valderas@projectmasa.com

Check it out...
Last year's Video at Luminaria
Posted by Luis Valderas at 11:55 AM No comments: 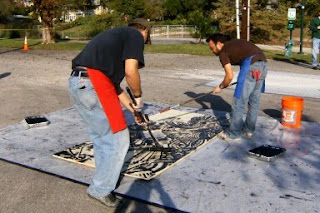 Paul Karam and I were invited by StoneMetal Press to participate in their large scale printing event that was to happen in the Blue Star Complex parking lot. 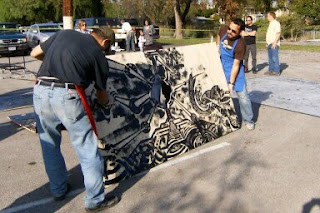 We created a 2 color woodcut for this printing event.


This year Stone Metal Press rented a smaller steamroller. This made printing a lot much easier on that day. 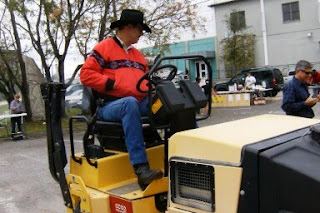 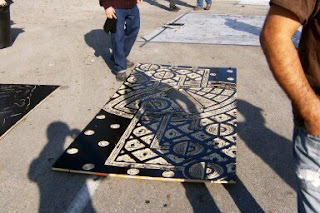 For our 2 color print we needed extra help in order to ink up our extra plate. San Antonio artist, Kim Bishop, helped us with this problem. After having done a 2 color print like this we will have to plan for something new. 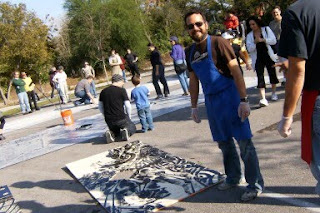 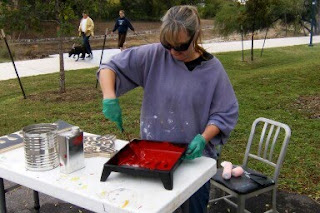 These prints are now in exhibit in Denver, Colorado 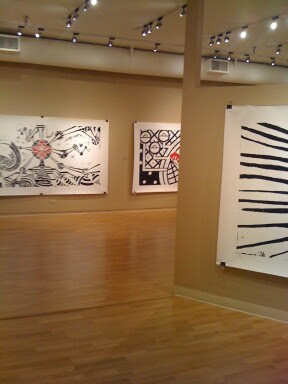 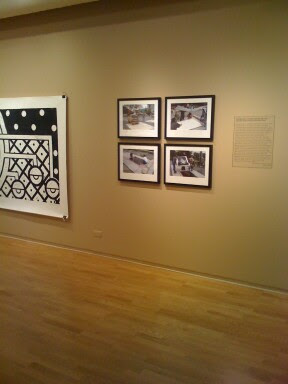 November 2, 2009 was the premier of my Dia del los Muertos installation at Centro Cultural Aztlan. As co-lead artist, not only did I curate the exhibit and coordinate the event, I created a Dia de los Muertos Altar in memory of my father. I collaborated with my mother in this year's installation. Her contribution to the altar were 37 coronas(funeral wreaths) that she still makes and sells at her ceramics & flower shop in The Rio Grande Valley. 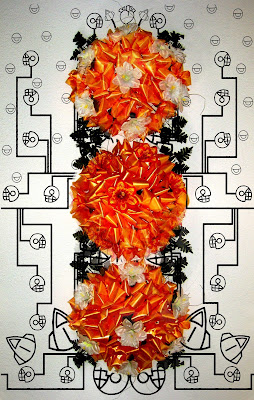 I began planing and working on this large scale altar in July of '09 after I had a small talk with my mother. I had been wanting to reveal a side of my father that represented how much we miss him and what reminds our family of his presence around us everyday. She was surprised that I suggested the use of the corona arrangement as part of the altar for my father, but it only made sense to me, since he was so closely involved in the business. My mother talks of how when they both started the business he told her that he wanted her to have something that would allow her to be survive financially without having to go get a job and work for a stranger.
I always felt that my father had a keen insight to the future and proof of this is that to this day my mother still has loyal neighborhood customers that prefer to buy coronas from her shop. Most of these costomers' families have lived in that neighborhood(La Paloma) for more than 50 years. Now her customers include the kids and grand kids of those people that my father knew. As with everything, however, time has changed things, families have died out, new families have moved in, the busness has transformed with the influx of cheap ready-made floral arrangements imported form Southeast Asia. This installation represented for me a way of also sharing my mother's craft as an artist to the San Antonio community. Check out last year's installation. 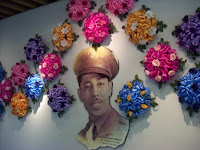 Victoria Moctezuma Valderas has lived in The Rio Grande Valley region most of her life. She has been a florist and ceramist for over 30 years while at the same time raising a family of 4 kids. Together with her now deceased husband, Horacio Sanchez Valderas, she owned and operated a succesful flower/ceramic shop in McAllen, Texas-the family owned business was a means to the future. In the hey day of the shop operation her clients included the gift departments of major department stores like J.C. Penny, Dillards, and Jones & Jones at La Plaza Mall(the largest mall in McAllen back then). 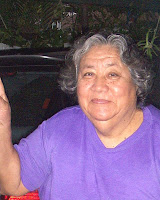 It was a family business and everyone came together to work on every aspect of the business, including the mass production of coronas(funeral wreaths) for Mother's Day, Father's Day, and Dia de los Muertos. Everyone had a job in the process: the ribbon cutting, wax leaf making, the bow folding, and wreath tying and wrapping all were carefully organized as duties for every family member.
In the spirit of honoring of her deceased husband on Dia de los Muertos, she has collaborated with her son, Luis Valderas, to create an altar. One of the main iconic symbols used on this installation is the corona(funeral wreath). The brightly colored wreaths represent the respect, honor, hope, love and endearment that embody the spirit of Dia de los Muertos in our ever-changing Mexican-American cultura.

The Installation of the Altar 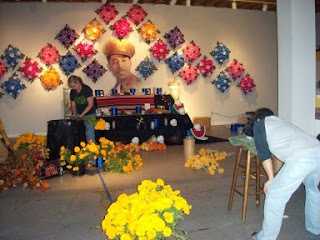 The installation of the altar was done on the evening before the event opening. November 1st, All Souls Day, is believed to be the day that all souls of the dead come back to visit. It is on that evening that the altar is set up and the ceremonial burning of Copal, the laying out of food and lighting of candles occurs in order to guide the loved one back to visit. For this task I counted on help from two of my friends and well known San Antonio artists-Kim Bishop and Martin Rodriguez. 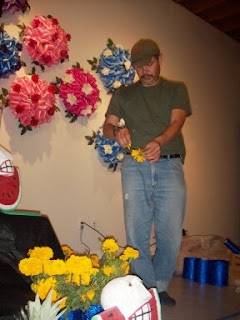 The entire installation process was filmed and is in the process of being edited. I will post it as soon as it is available. It took about 7 hours to install the altar and the entire night I shared stories about my father and stories of the many adventures that he would tell us. He was truly with us that evening. I enjoyed sharing these stories with my close friends, but more importantly, I enjoyed their genuine amazement over hearing of my 94 year old father's life and adventures. 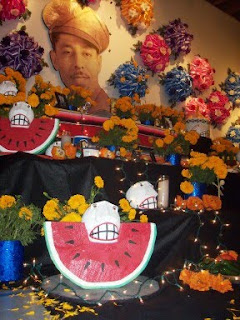 Finally, at the end of the night, as we were walking out of the gallery and were about to lock the door, an unexpected event happened. The tow topmost coronas on the installation gently fell. We all looked at each other and smiled noticing that we al had goosebumps. He didn't want us to leave yet... ,) 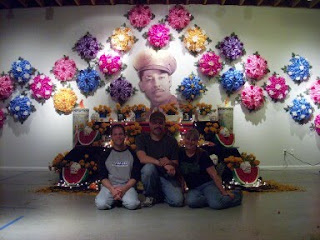 Posted by Luis Valderas at 7:40 AM No comments: