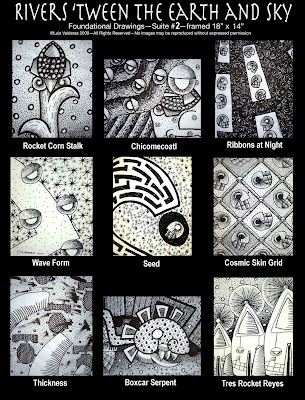 “Rivers Tween The Earth and Sky” is the first body of work that will be released for the initial Micro Fund start up. It consists of a series of 11 Suites(groups) of original drawings (9 drawings per suite) that are being made available for purchase at $100 per framed(18" x 14") drawing.

Posted by Luis Valderas at 12:42 PM No comments:

“Rivers Tween The Earth and Sky”  is the first body of work that will be released for the initial Micro Fund start up. It consists of a series of 11 Suites(groups) of original drawings (9 drawings per suite) that are being made available for purchase at $100 per framed(18" x 14") drawing. 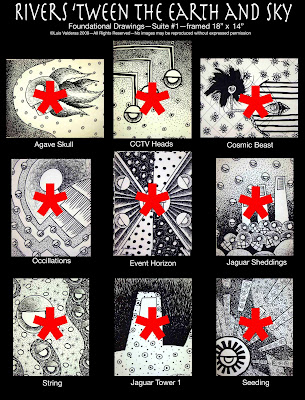 What is this for?

To fund various projects that Luis Valderas is producing in the Fall 2009 Exhibit Season, 100 original ready-framed drawings are being released to the public. The purchasers will be acknowledged on the soon to be released new micro-fund weblog as contributors to the specific public projects that are being produced Fall 2009 Exhibit Season. Internet updates on the blogspot will allow collectors and the general public to view the progress of El Macuiltochtli Micro-Fund.

"Born and raised deep in the heart of the Rio Grande Valley of Texas, Luis Valderas is a prolific native son whose work frequently includes references to both modern and ancient cultural roots," said Arturo Almeida-Curator UTSA Art Collection. "In an ever-growing and evolving body of work, his contemporary narratives, inimitably expressed through a filter of Meso-American myth and iconography, chronicle the Chicano experience on the borderlands and beyond."

Posted by Luis Valderas at 5:40 AM No comments: 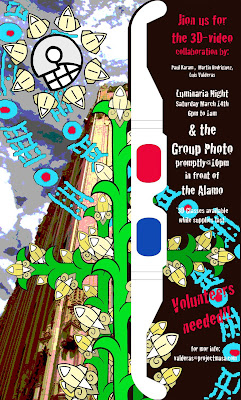 The 3D video for the Luminaria evening is almost done!!! I hope to see everyone there...Saturday March 14th, 2009 from 6pm to 1am.
This project is a collaboration between artists Paul Karam, Martin Rodriguez, and Luis Valderas.
We are organizing a mass 3D glass wearing Group Photo at 10pm in front of the video.
Volunteers needed!!
Supplies are limited so show up promptly if you want to get a 3D glass and be in the group photo. We will be posting pix and video of the evening on this blog, so stay tuned...more updates coming soon.
PHOTO UPDATE ON LUMINARIA NIGHT...

The crowd that evening was phenomenal.
The Luminaria footprint was twice as large as last years event. The conservative final count of people at the event that evening was was 175k, but I have a feeling that it may have been more if the weather had been a little better during the day-it drizzeled all morning long until about noon.

That made it all the more stressful, but worth it after seeing the way they were captivated by the 3D video. There were only 450 3D glasses used that evening and these glasses were released to the crowd at 10pm Luminaria night. San Antonio College art-student volunteers help us pass out the glasses at key points in the audience. At that time we began to collect photographs and video of the crowd that gathered round to view the 3D video. It was all very exciting to see happen. The audience was joined together in mass participation.

The video loop ran a full 8 minutes and people seemed to watch all 8 minutes of the 3D video. People who were done watching the video began sharing the glasses throughout the night and more of the crowd was able to watch the 3D video. 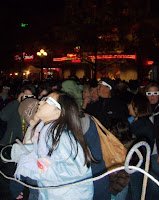 We are currently working on the video wrap up of the installation day and the event night. Martin Rodriguez collected video the entire evening and we were able to accumulat a large amount of raw footage of the entire day. This video will be released in a future update where we will be posting additional photos and information. 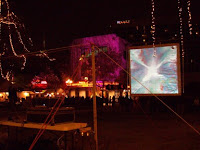 At this point we would like to extend thanks and recognition to our sponsors without whom the entire project would not have been possible: MK1 Construction Services, Urban -15, MARAKGREEN, TPI,L.L.C. We would also like to thank the art student volunteers from San Antonio College that were organized by art student Megan Quinn.
Posted by Luis Valderas at 7:55 PM 1 comment: 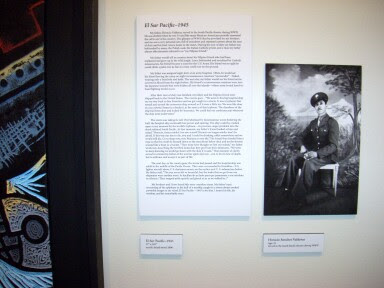 I have been selected to be the first artist in the Texas Contemporary Texas Artists Series at UTSA's Institute of Texan Cultures. The series will change quarterly and serves to spotlight contemporary Texas artists from San Antonio. It is curated by Arturo Almeida-curator to the UTSA Permanent Collection.

I am overjoyed  that the cuento my father used to tell my brothers and sister when we were growing up is prominently featured next to the color inlayed woodcut in the exhibit. There is a photo of him during the war that is also displayed. This is serendipitous because there is currently an ongoing exhibit at the museum that relates the contribution of Mexican Americans to the WWII effort. It has always been my goal to be able to share my father's story with others.

The exhibit will be on display from January 12th to March 29th 2009. If you are in town or happen to have time, I would appreciate a visit or comment. The opening evening was presided over by Dr. Ricardo Romo and followed by an intro by Arturo Almeida and a short artist talk. I thank all my supporters for showing up for the evening event and look forward to any comments or questions.
Update 03.10.09 I just recently got word that I was mentioned in the "Notable Hispanic Events" calender in HISPANIC Magazine this month!!! 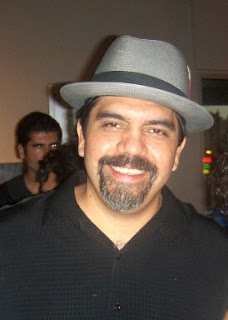 My friend and camarada Manuel Diosdado Castillo has come to pass. Manuel had been battling cancer and finally went on to his next journey...yesterday evening. It was Dia De Los Reyes and it was such a fitting day for him to begin his next journey...He will be missed by many-he went everywhere and made an impact in so many peoples' lives...As executive director of San Anto Cultural Center.
His contributions to San Antonio culture and arts in the West Side are inumerable and invaluable. His presence and participation with the National Association of Latino Arts and Culture leaves us all at a loss...Buena Fortuna on your next journey Manuel...a candle is lit for you and may you join the rest of the warriors that follow the Sun across the sky everyday into the underworld... 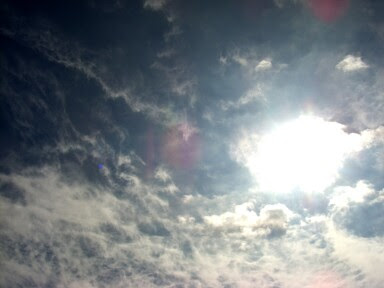 the sky during the caravan to the interment @ San Fernando-III 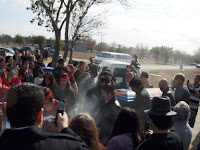 Manny was brought in with all his friends surrounding him. He touched and broght together so many people that the day of his interment the raza came out to wave him goodbye as the caravan drove by following the San Anto Mural Route. It was very special, to say the least...we will miss that Vato Loco that had the Right Stuff and saw the Right Stuff in everyone around him... 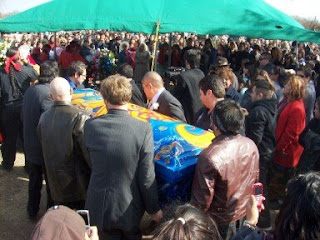 Posted by Luis Valderas at 4:55 AM No comments: