Step 2: EXAMINING MY WORK
I felt that the following questions could be addressed as bullets that I will later organize into a statement or key phrases that I can use to talk about my work in situations as needed, for example: an elevator speech, interviews, presentations, or public speaking situations. 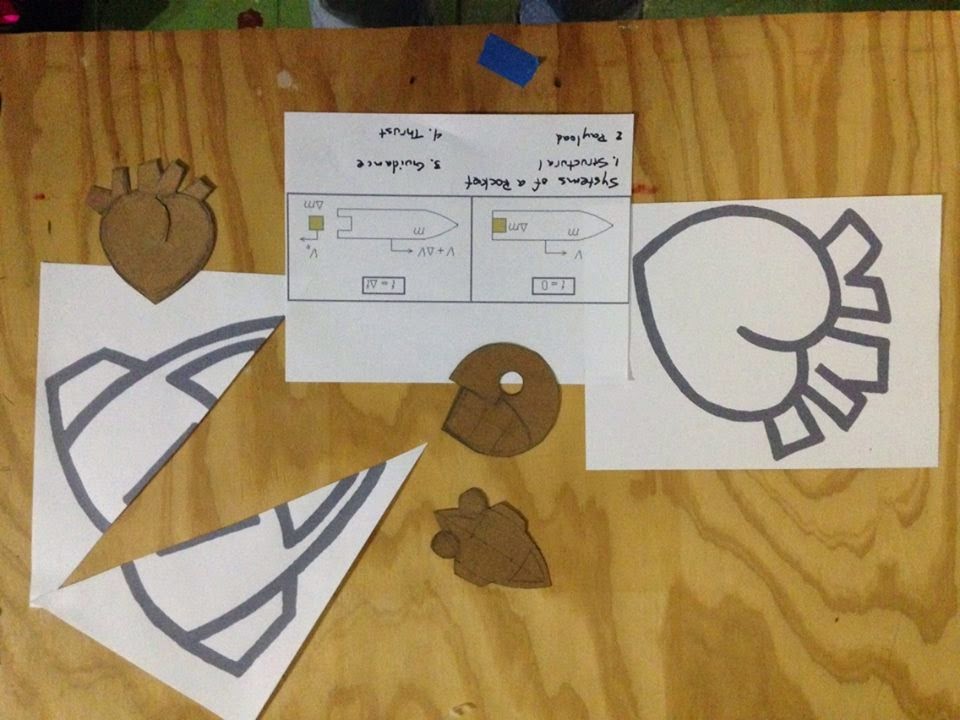 WHY DO I MAKE ART?
(know yourself)
-To make commentary on observations
-I’m following a tradition of making instilled in me
-To tell stories
-To explore "what if's"
-To keep my family alive
...This is the question may sound quite easy to answer, however, that question requires every artist to know themselves. The Delphic maxim inscribed on the Temple of Apollo is a lot more complicated than what it presents itself. The query had me battling out ideas of longevity of my work  In the end the the knowledge of forms and the empirical observation become combined. Ha!!!

WHAT INSPIRES MY ART? 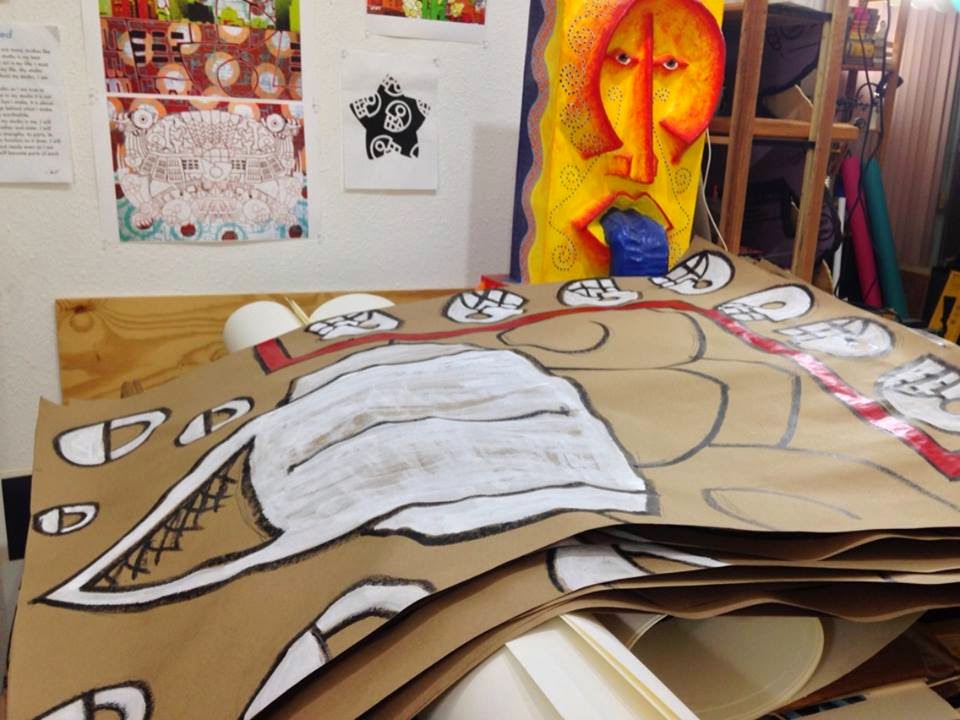 The search into my work continued and now had a definite direction. The next phase consisted of planning for the premier exhibit that we were going to have at the Guadalupe Cultural Arts Center. After getting some things out of the way (we were also preparing for our Texas Size Breach Print Event in El Paso) and coordinating a meeting time, the group met to discuss and an exhibit date. December 12, 2014 was agreed upon—we had exactly 5 weeks to create a response to the critiques. I could tell that this was going to be an intense month—

At the beginning of October 2014 I got a letter inviting me to participate in very special art commission for Univision.

“Door to opportunity” KWEX Univision 41
For over 55 years KWEX Univision 41 has been the Door to Opportunity for hundreds of people looking to accomplish their dreams in media.  So many have walked through the doors of what began as the first Spanish language Radio and  Television station in the country.  Thanks to our founders, such as Don Emilio Nicolas and so many others, today we are able to say Spanish Language media is as powerful as the general market.
As a way to honor the past and bring to life the opportunities that many enjoy today, KWEX Univision 41 has preserved the wooden doors that once lived in the original Television Station on Durango Blvd in Downtown San Antonio.
A total of 9 doors will be painted, sculpted and simply transformed into a symbol of opportunity and dreams!  So far only 5 have been completed by local art students from Henry Ford Art Academy and respected artists such as Armando Sanchez and Ronald Rocha have taken this vision and have expressed what Univision means to them and the impact it has had in our local community and in the United States.
The project, Door to Opportunity was born from our previous V.P and General Manager of KWEX Univision, Jeff Zimmerman who believed that the history of KWEX needs to be cherished, respected and remembered for the new generations to follow.
We ask that each door maintains a unique art style that will showcase and represent the Latino community that existed when Spanish Language television and radio first began and what it means to our society today.
The doors will be displayed in the two KWEX Univision facilities. The main building on the North Side of San Antonio and the downtown Univision Studio located in Market Square inside the Texas A & M Cultural Art Center. Door to opportunity will transcend in history for others to be reminded of how Spanish Language television and radio began.


This invite was serendipitous. My ideas for my response had been formulating around some research that I had begun shortly after the critique. I sketched out my ideas and I began drawing the Stages of a Rocket Launch, the Foliated Cross and the Great Skull Rack series based on that research. The task of working on the door was in itself opening a door for me to explore. In the Artist Lab questionnaire I had answered—that my goal was to create work that would go into corporate collections and public art works. The door was the basis for the the congealing of a few studies on the metaphors I was exploring. 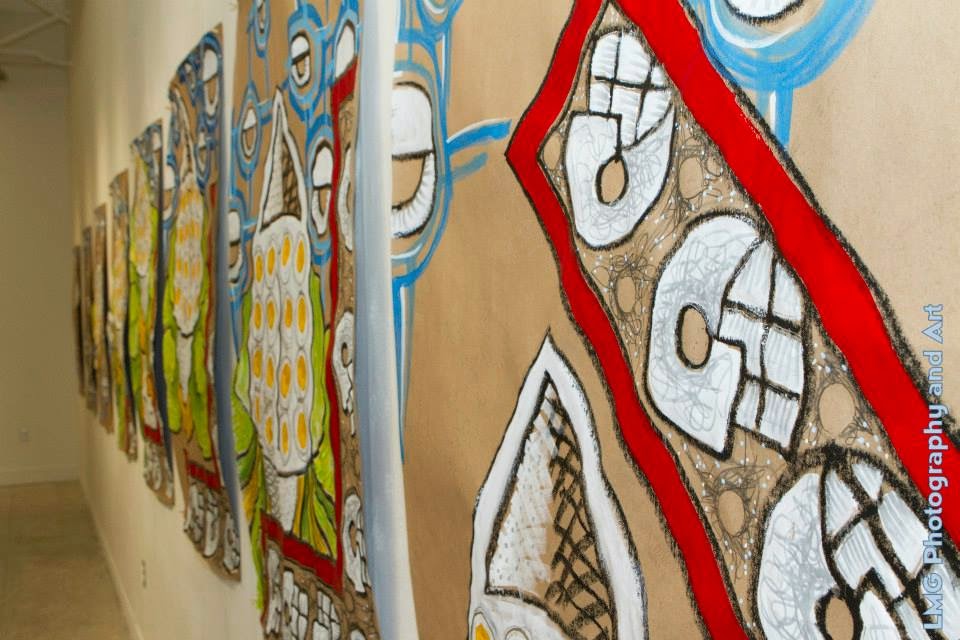 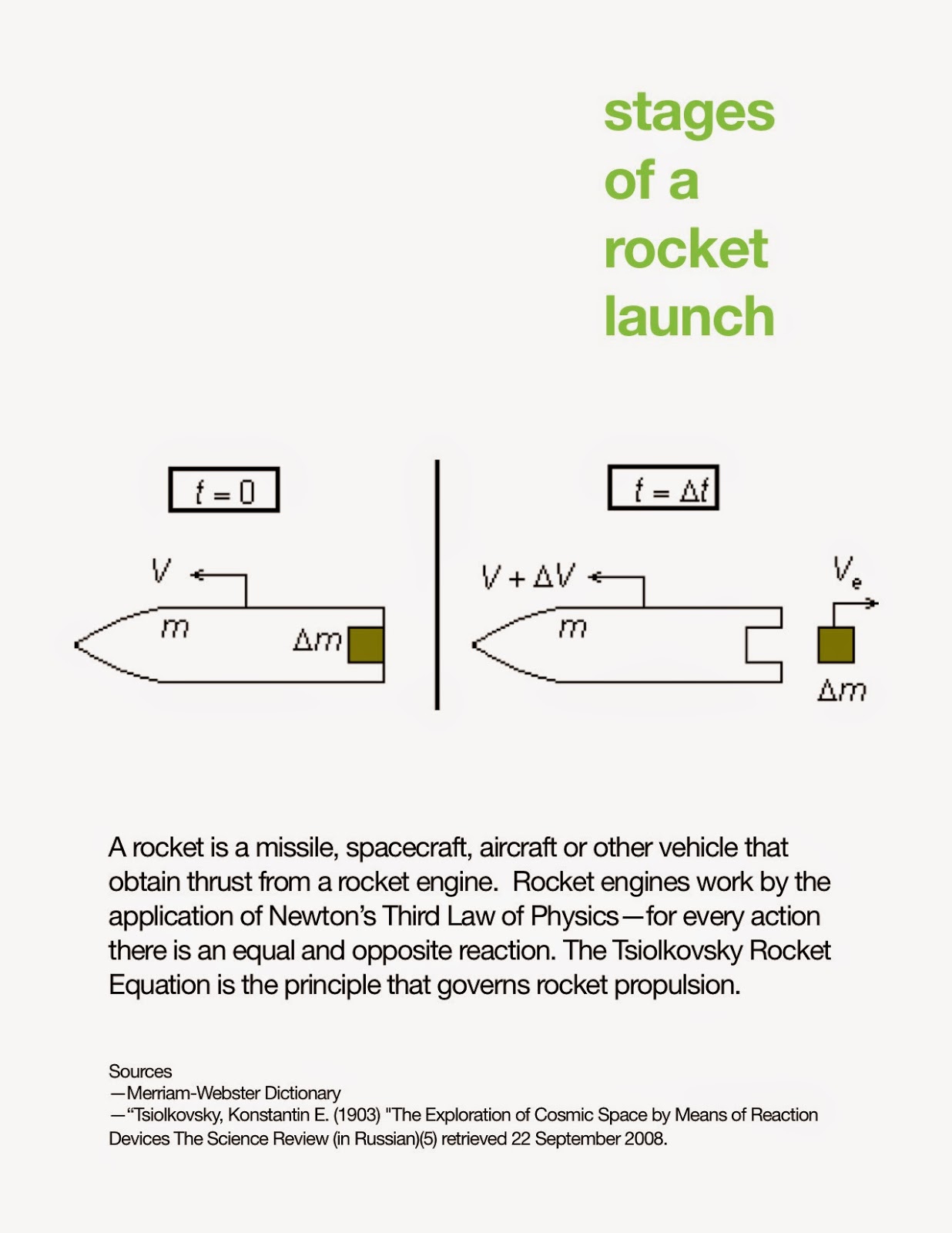 The rocket is a vessel that represents Sir Issac Newton's Third Law of Physics—For every action there is and equal and opposite reaction. In my work the rocket is a metaphor for the toll that a border crossing of any kind takes on the those that cross. Click on this video—it examines this idea at a more in-depth manner. 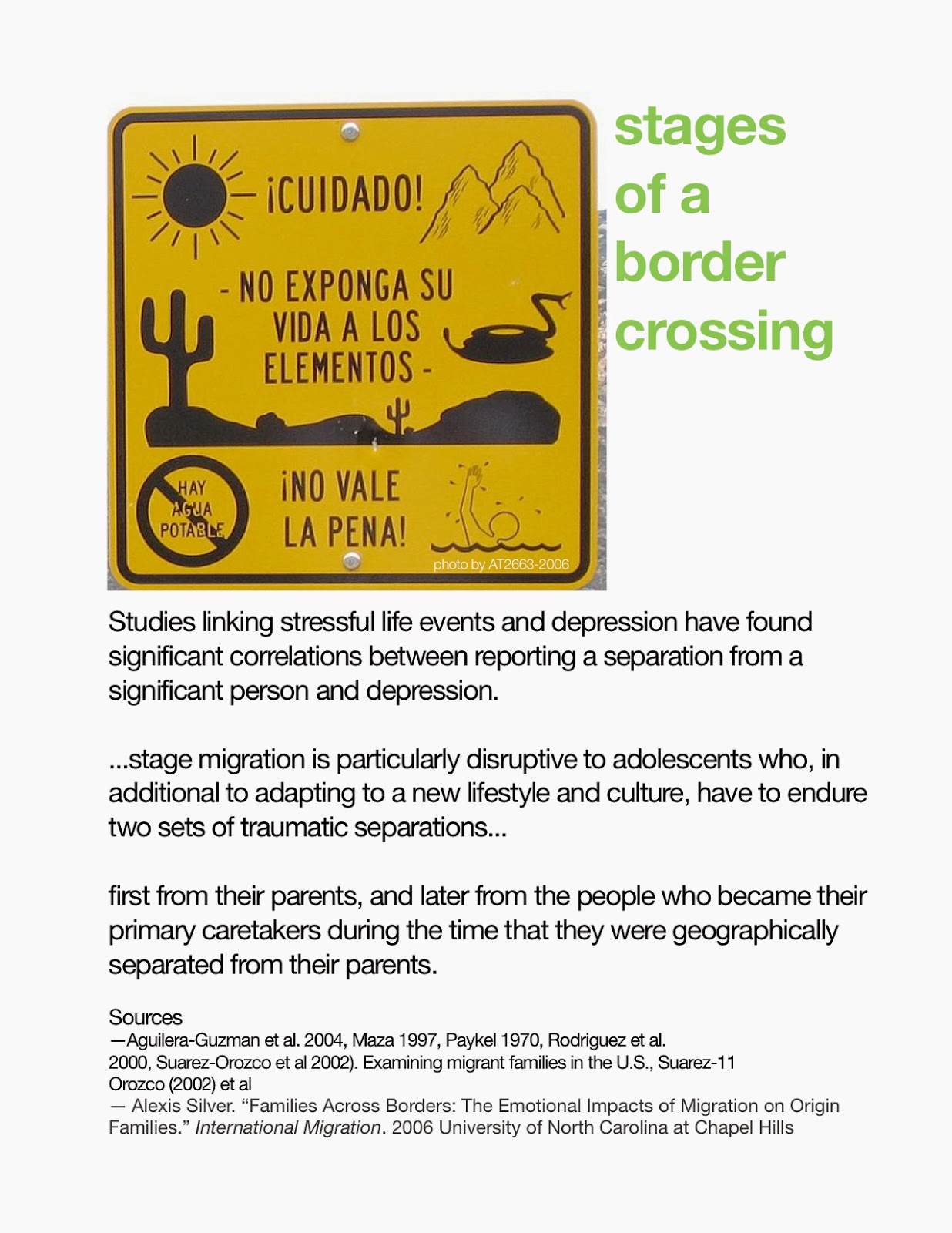 It's an example of a very specific principle, the Tsiolkovsky Rocket Equation, which governs thrust on rockets to reach escape velocity. Basically, the rocket is a vessel that expends some of it's mass in order to breach the the border of earth's atmosphere and escape the grip of the earth's gravity. 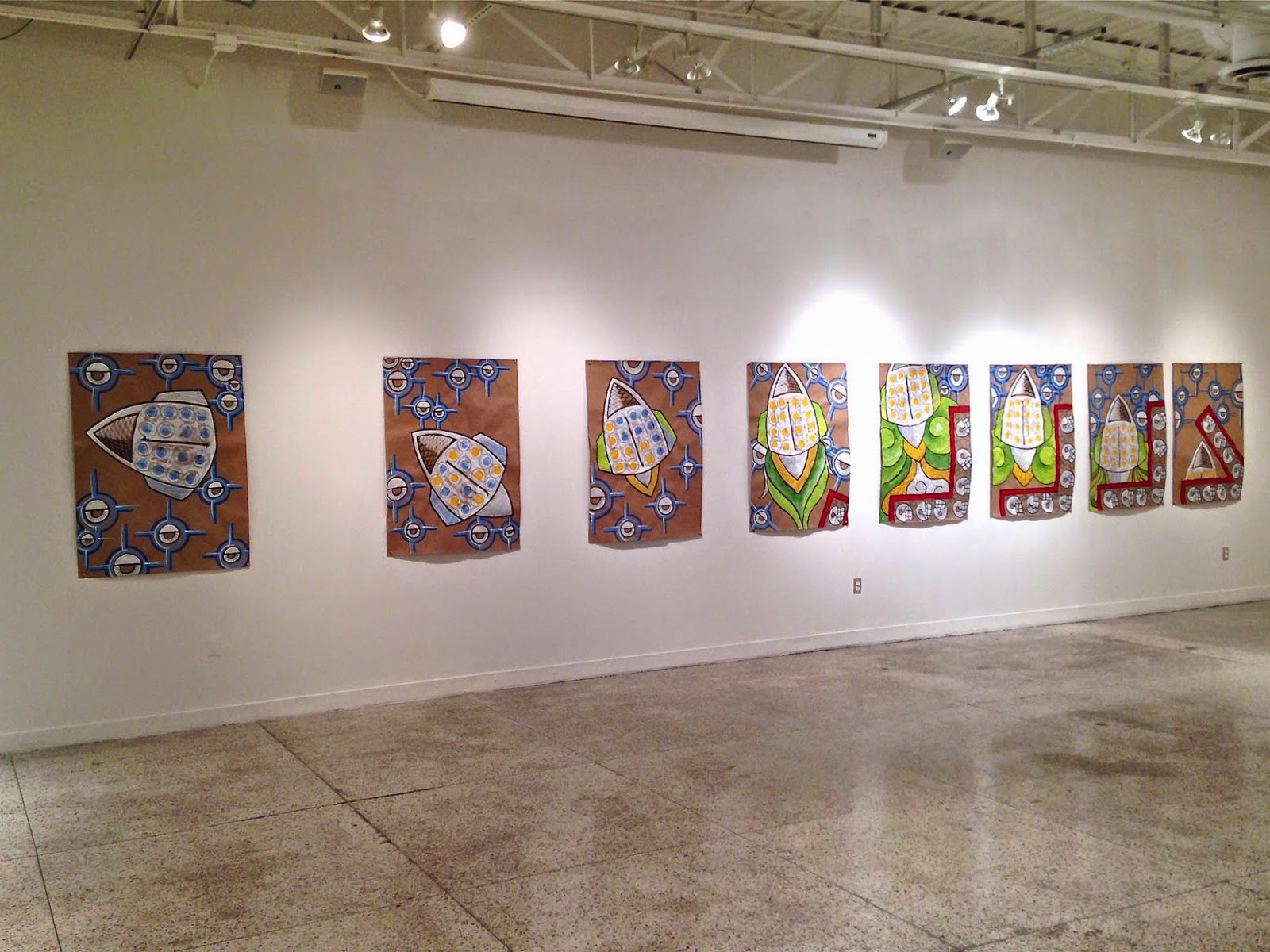 Stages of a Rocket Launch installed at the Guadalupe Cultural Arts Center—Dec. 12, 2014


The Foliated Cross  /  The Future of Humans 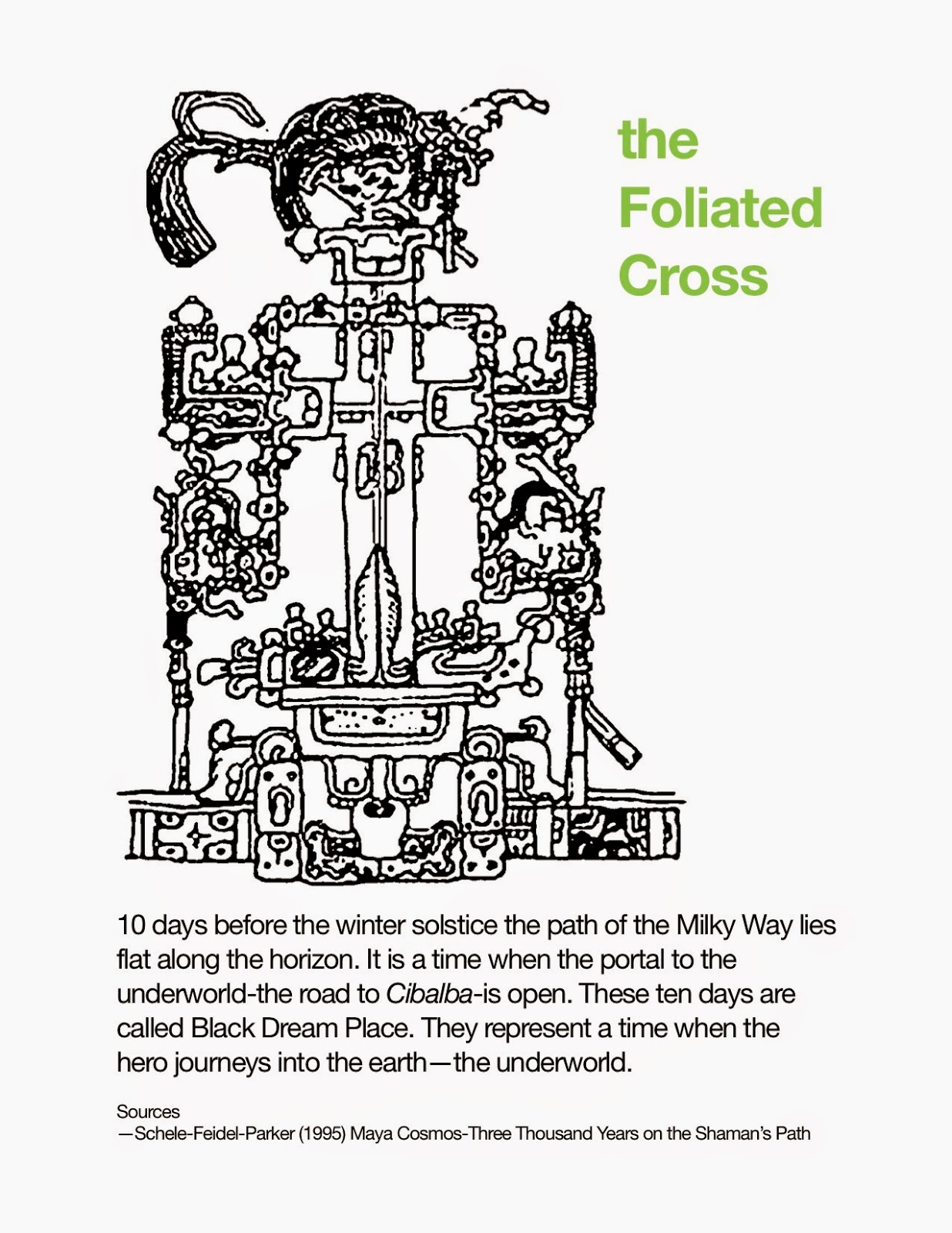 There is a special time of the year when the ancients Mayans would observe and recognize certain aspects of our cycle of temporality. The cycles of the Milky Way were mapped and plotted as the story of hero gods, metaphors to astronomical cycles occurring at very specific times of the year. December 12th is one of them. The opening night presented a spiritually charged day. In the nahuatl tradition it is the feast day of the earth mother-Coatlaxopeuh/Coatlicue also know as The Virgin of Guadalupe. The exhibit night would also coincide with all the other Guadalupana exhibit that were happening in town. 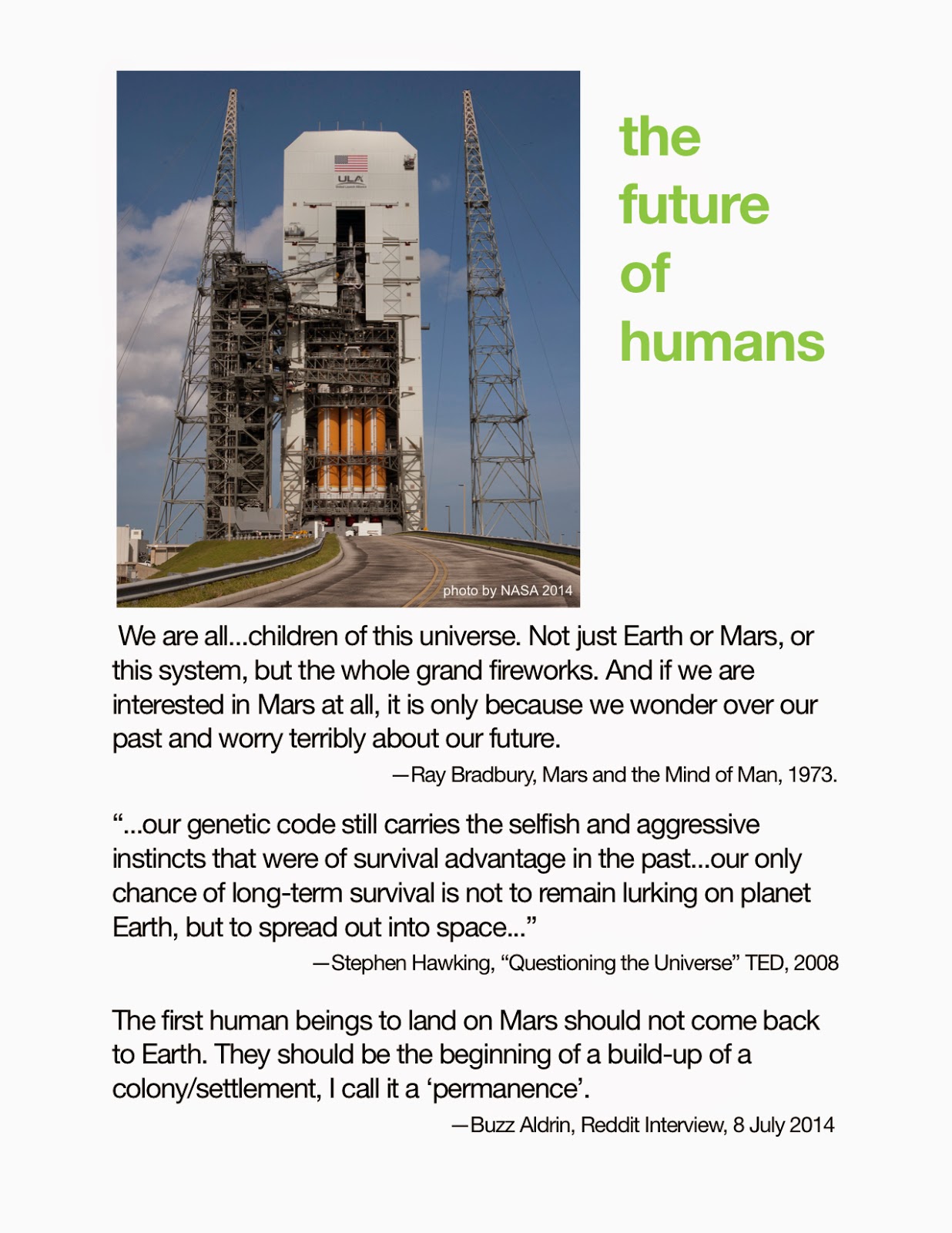 The Foliated Cross Image that is found inside the Temple of the Cross in the Yucatan marks a very specific time of the astronomical year-the beginning of the 10 day period before the winter solstice. This time is considered a door way into the underworld. A time of the year when the hero Twin could travel into the underworld and bring back his ancestors for the future.

In my explorations I was coming across some exciting possibilities for some links to my imagery and ideas that were beginning to reveal themselves as I dealt with the questions I had before me and began to tackle—the creation of an image that would be satisfactory for what I envisioned on the Univision "Door for Opportunity" Commission.

The Univision "Door to Opportunity" Corporate Commission
The research and studies that I worked on for The Foliated Cross / The Future of Humans is the basis for this very specific commissioned piece on the door that I call. "The Sky is Brown". see summary below


The Sky is Brown — by Luis Valderas
Painted for Univision's "Door to Opportunity" project, Valderas creates a legacy piece on one of the historic doors to the first Spanish Language Radio & Television Station in the country. Univision was born in the heyday of the space race, a time that inspired young latinos to look up to the stars for their future. The image represents the portal which the hero must cross through to begin his journey.
The Great Skull Rack / The Great Border Wall 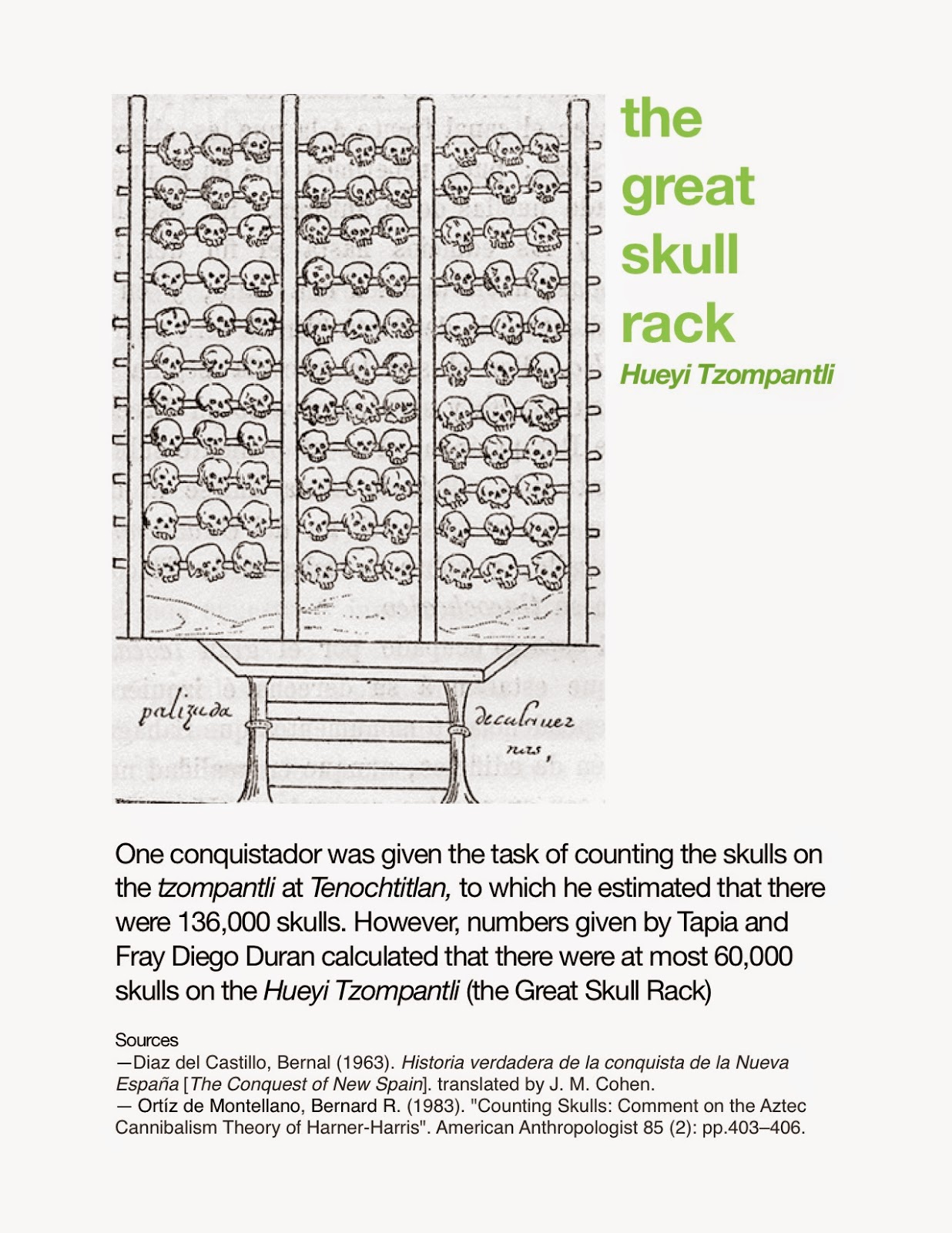 This piece is a metaphor about U.S. Foreign Policy toward Mexico and Central America and misinformation as it relates to the ancient skull rack. The fact that at times the human cost has been minimized and downplayed is alarming. The means by which humans have imposed themselves upon others throughout history be it religion or nationalism are seldom subtle. How many accounts of history being repeated and human tragedy need to occur before we all as a whole decide to take action? 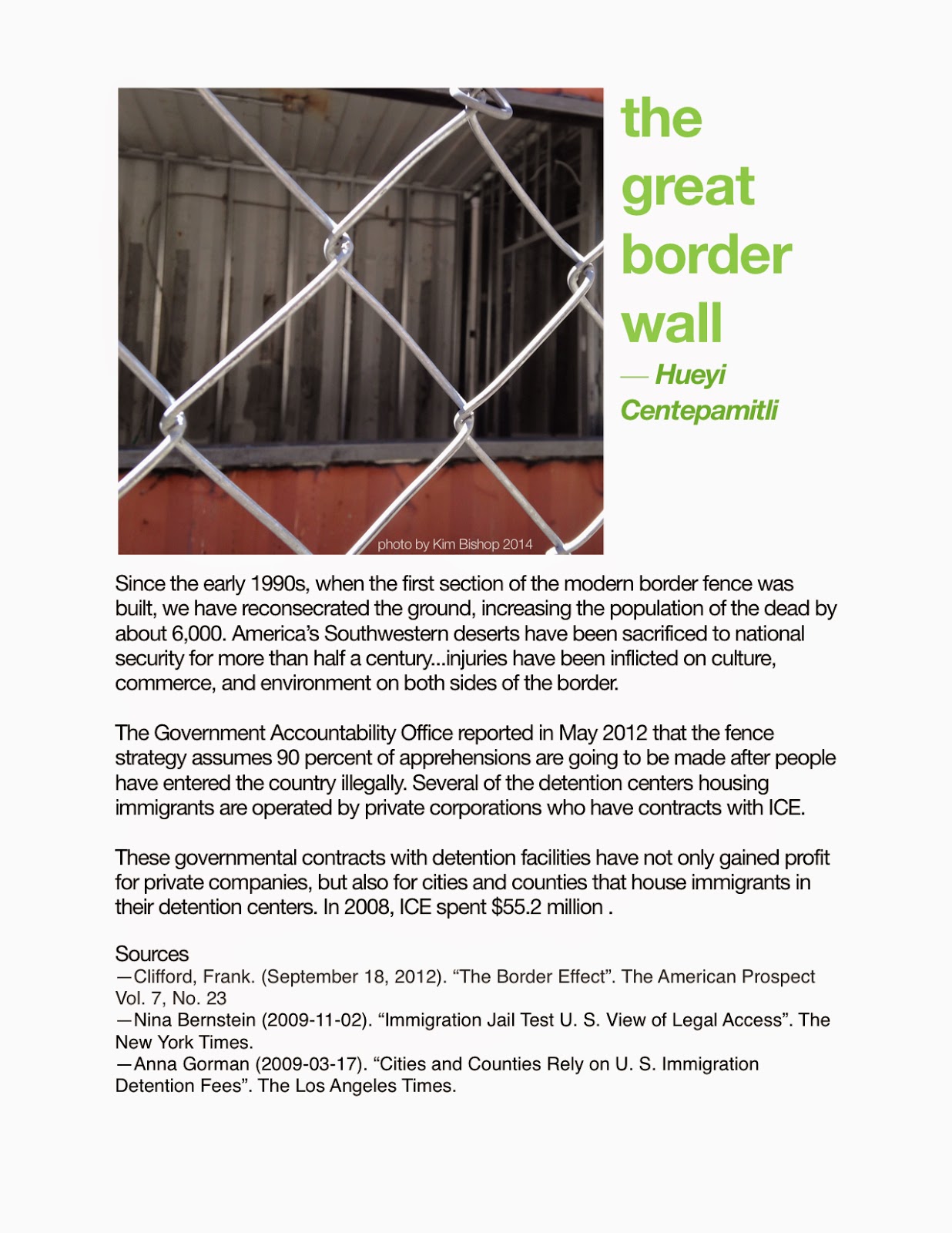 The human tragedy occurring on the southern border, in Mexico and Central America is a direct result of present U.S. Foreign Policy towards Mexico and Central America. It is based on Manifest Destiny, the oppression of people and countries to benefit Multi-National Corporations. It must change lest it continue to minimized the human cost. The xenophobia that the immigration issue has brought up adds fuel to the ongoing state of politics in the U. S. 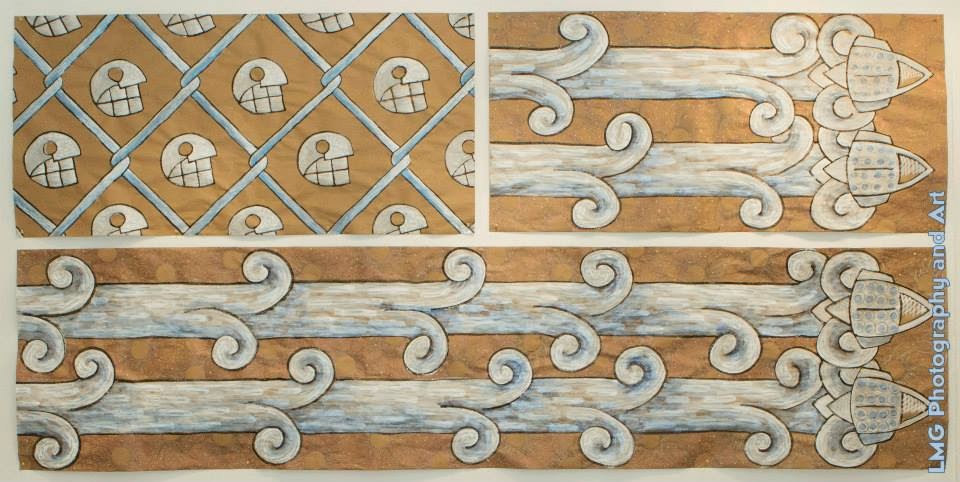 I believe that the response that is most effective in order to begin this policy change must happen with enlightenment, public awareness and action. Thus I suggest a few places to visit online in order to become better informed.

Posted by Luis Valderas at 1:19 PM